To find out more about cookies, what they are and how we use them, please see our privacy notice, which also provides information on how to delete cookies from your hard drive.

The United Kingdom of Great Britain and Northern Ireland (the UK) have confirmed its Generalised System of Preferences (GSP) for Cambodia, underlined the Ministry of Foreign Affairs and International Cooperation in a press release issued this morning.

The confirmation was made at a meeting between Prak Sokhonn, Deputy Prime Minister, Minister of Foreign Affairs and International Cooperation, and Mrs. Tina Redshaw, the UK Ambassador to the Kingdom of Cambodia.

During the meeting, the UK ambassador informed that starting from Jan. 1, 2021, the UK will implement independent trade policy.

The UK Ministers have decided not to replicate the EU partial withdrawal of trade preferences under the Programme Everything But Arms (EBA) for Cambodia taking into account the economic impact of COVID-19 on some of the most vulnerable members of the society, among others, garment workers.

The Ambassador said that the UK is exploring ways to establish regular dialogue with Cambodia’s authorities on issues related to human rights and other freedoms.

With this regard, Mr Sokhonn expressed his high appreciation for the decision by the United Kingdom considering it as encouraging for the Cambodian government and a very good news for our workers who already suffer much from the COVID-19 disastrous impact. He stressed that Cambodia is firmly committed to forge mutually beneficial relations with the UK in bilateral and multilateral areas. Heng Panha – AKP

This article is originally published in KHMER TIMES 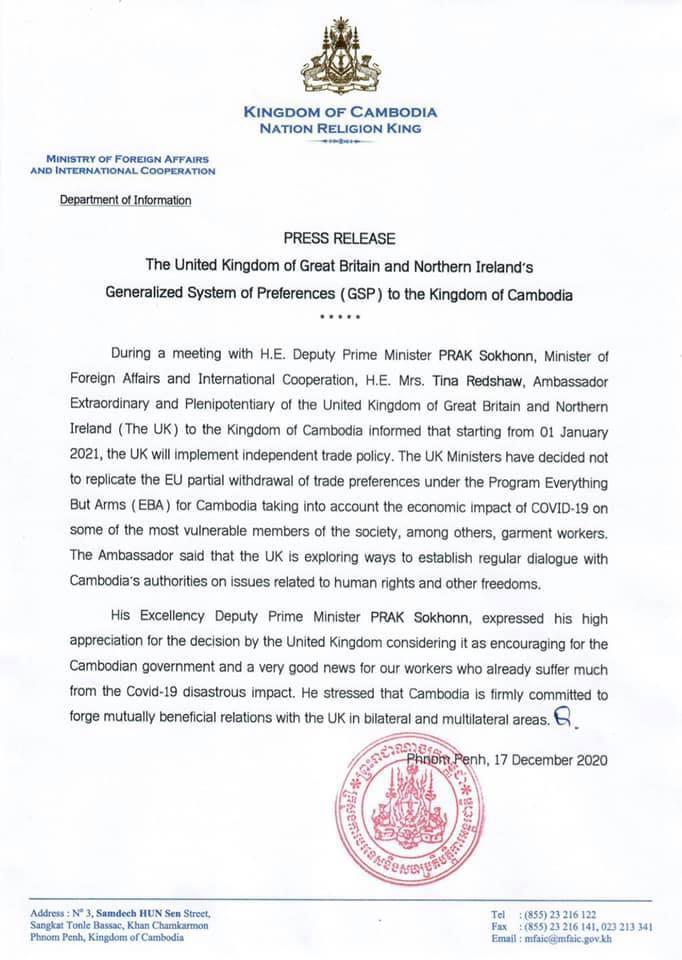